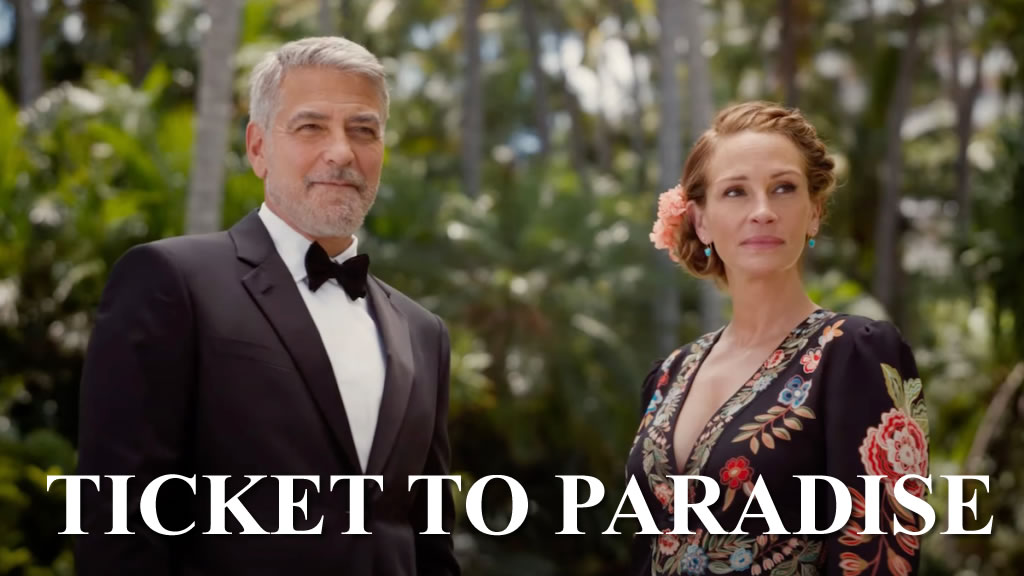 Synopsis: A divorced couple come together and travel to Bali to try to prevent their madly in love daughter from making the same mistake she thinks they made 25 years ago.

Time and time again, the struggle of the sexes suits modern egalitarian times, although there is nothing modern about the ancient and effective comic game of the male character being the scapegoat (with or without sharp-toothed dolphins) in gags, something that Howard Hawks (the most feminine male director in Hollywood) patented in his comedies (and in his westerns). Because as much as it is intended according to a contemporary universe of the couple as something open or in danger of extinction not limited to marriage, ‘Journey to Paradise’ is deliciously old-fashioned (the two young marriageable people who generate the conflict are) in that respect as the best romantic comedies still are.

Deliciously silly (what the Juan de Orduña of a camp comedy would say, yes, and romantic, too, with a feuding couple and a Caribbean setting) are Julia Roberts and George Clooney, the soul of a deliciously inconsequential and adorably predictable film. Watching them “hate” each other and play tricks on each other like Katherine Hepburn and Cary Grant from ‘The Philadelphia Story’ to the rhythm of very well-written dialogues and retorts, betting on physical comedy and slapstick (the games at the party that make us want a new ‘Charada’ with the two of them as protagonists; the dances…) and even some unexpected but welcome moment of calm and bitter reflection on the failure of coexistence in common and the end of love (that conversation/confession that places Parker’s film very near another Stanley Donen as ‘Two for the road’).

🎞 The Banshees of Inisherin

This site uses Akismet to reduce spam. Learn how your comment data is processed.

No comments to show.

🎞 Prey for the Devil

🎞 Knock At The Cabin

🎞 Avatar: The Way of Water

We use cookies on our website to give you the most relevant experience by remembering your preferences and repeat visits. By clicking “Accept All”, you consent to the use of ALL the cookies. However, you may visit "Cookie Settings" to provide a controlled consent.
Cookie SettingsAccept All
Manage consent

This website uses cookies to improve your experience while you navigate through the website. Out of these, the cookies that are categorized as necessary are stored on your browser as they are essential for the working of basic functionalities of the website. We also use third-party cookies that help us analyze and understand how you use this website. These cookies will be stored in your browser only with your consent. You also have the option to opt-out of these cookies. But opting out of some of these cookies may affect your browsing experience.
Necessary Always Enabled
Necessary cookies are absolutely essential for the website to function properly. These cookies ensure basic functionalities and security features of the website, anonymously.
Functional
Functional cookies help to perform certain functionalities like sharing the content of the website on social media platforms, collect feedbacks, and other third-party features.
Performance
Performance cookies are used to understand and analyze the key performance indexes of the website which helps in delivering a better user experience for the visitors.
Analytics
Analytical cookies are used to understand how visitors interact with the website. These cookies help provide information on metrics the number of visitors, bounce rate, traffic source, etc.
Advertisement
Advertisement cookies are used to provide visitors with relevant ads and marketing campaigns. These cookies track visitors across websites and collect information to provide customized ads.
Others
Other uncategorized cookies are those that are being analyzed and have not been classified into a category as yet.
SAVE & ACCEPT